So far, we've seen that Monte Carlo path tracing is very powerful in generating realistic images! However, you may have noticed that it also always results in a large amount of noise.

Of course, noise can be eliminated by increasing the number of samples per pixel. However, it turns out that we usually don't have to do this uniformly for all pixels. Some pixels converge faster with low sampling rates, while other pixels require many more samples to get rid of noise.

Adaptive sampling tries to avoid the problem of using a fixed (high) number of samples per pixel, by concentrating the samples in the more difficult parts of the image.

We provide a very simple algorithm to enable adaptive sampling. It works for each pixel individually based on statistics, detecting whether the pixel has converged as we trace ray samples through it.

Suppose that you've already traced n samples through a pixel. We can immediately get their mean μ and standard deviation σ. Let's define a variable

to measure the pixel's convergence.

Intuitively, I is small only when the samples' variance σ​2​​ is small, or the number of samples n is large enough. So, the smaller I is, the more confidently we can conclude that the pixel has converged. Specifically, we check if

where maxTolerance=0.05 by default. If the condition above is satisfied, we assume that the pixel has converged and stop tracing more rays for this pixel. If not, we continue the tracing-and-detecting loop.

You may wonder why the measure I is defined this way and where the magic number 1.96 comes from. In fact, we're calculating a confidence interval in statistics. Specifically, we are trying to solve for I so that, with 95% confidence, the average illuminance in this pixel is between μ−I and μ+I, based on our n samples so far. The number 1.96 comes from the 95% confidence. To learn more about this, you can check out this article as a nice introduction, and the wikipedia page of z-test for a deeper understanding.

For this part, you will work in PathTracer::raytrace_pixel() in src/pathtracer/pathtracer.cpp.

by adding x​k​​ and x​k​2​​ for each new sample. Then the mean and variance of all n samples so far can be expressed as

You can enable adaptive sampling from the command line with -a <samplesPerBatch> <maxTolerance>. Note that, once the -a argument is specified, the previous sampling rate assigned by argument -s now represents the maximum number of samples.

For example, when you run 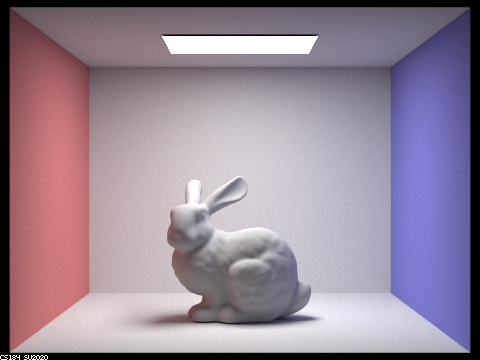 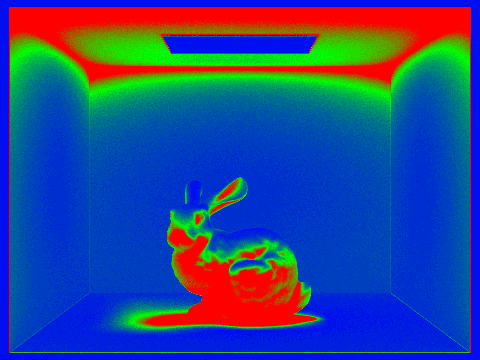 Note that since the adaptive sampling aims at generating noise-free images, it can take very long to converge. For example, this bunny takes more than 2 mins 30 seconds to finish rendering on a Hive machine. (However, judging from the sampling rate image, using a uniform 2048 samples per pixel should take even longer.) Therefore, it is recommended that you test it with a low resolution image or on a small patch of an image to verify its correctness before you start generating final images for your write-up.